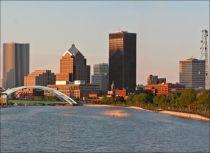 All 12 of the metro areas in New York State had economic growth rates below the national average last year.

That’s according to the Empire Center, a fiscally-conservative think tank which looked at the recently released federal data on Gross Domestic Product.

The GDP for the Rochester metro was down slightly over the last five years, with the area’s economic output down a net .1 percent over a five year period. Buffalo saw an increase in its GDP numbers over the last year.

Kent Gardner is chief economist at the Center for Governmental Research in Rochester.  He says GDP is only one measure of an area’s success, and a lot of other factors, including quality of life have to also be taken into account.

Gardner says it’s not surprising the Rochester area has faced challenges with its economy in recent years.

“Our dependence on large manufacturing firms historically has made it difficult for us to keep up with some of the other metros in the country that are reliant on service firms, or certain kinds of technology that are growing very rapidly,” Gardner told WXXI News.

But on the plus side, Gardner says there are Rochester businesses that have been adding jobs.

“There are a lot of wonderful companies in Rochester that are making great strides. We certainly have done a pretty good job of restoring the jobs that were lost in the great recession and I think we’ve got a potential to add to that employment base.”

Gardner also notes that GDP isn’t the only measure of a region’s success. He says quality of life also has to be considered in what contributes to the factors that make an area attractive for growth.