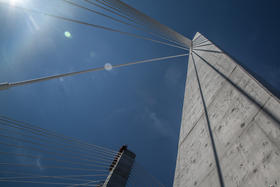 Gov. Andrew Cuomo is set to open on Thursday the first span of the new Thruway bridge over the Hudson River, known as the Tappan Zee Bridge and to be renamed the Gov. Mario Cuomo Bridge.

But questions still linger over how, ultimately, the bridge will be paid for.

Cuomo has been reluctant to divulge details on how the tolls on the bridge will be affected after the multi-billion-dollar project to replace the over three-mile-long span is completed.

Part of the estimated $4 billion project has been financed through one-time payments from banks as part of settlements after the financial crisis. There’s a $1.6 billion federal loan, and the Thruway Authority has taken out about three-quarters of a billion dollars in bonds.

But a full financial plan has never been released by the Cuomo administration, and it’s unclear whether new, higher tolls will be needed to pay for the rest of the bridge.

At a July 27 business group breakfast, the leader of the state’s Republican Party, Ed Cox, asked the governor how the bridge would ultimately be paid for after that.

“What is the final financing plan?” Cox asked.

Cuomo, who seemed a bit caught off-guard, answered that “the remainder after 2020 will be paid with toll revenue from the entire system.”

The tolls on the bridge are frozen at $5 until 2020. The governor did not say whether they would increase after that.

The business group Unshackle Upstate said at the time that it’s “unfair to ask upstate commuters to pay for a bridge that many will never use.”

On Aug. 7, Cuomo’s budget director, Robert Mujica, wrote a letter to the Albany Times Union after the paper editorialized against having all Thruway users subsidize the bridge. Mujica wrote, “no upstate tolls are necessary to build and operate the new bridge.”

Earlier this week, Cuomo seemed to walk back the July comments, telling reporters in Rochester that Thruway users in other parts of the state won’t be paying for the bridge after all.

Cuomo said he sees the bridge and the rest of the Thruway as “two discrete matters.”

The governor said his earlier words were misconstrued, saying “the facts have been confused.”

“You know there are always shadows and fears and conspiracies,” Cuomo said.

Cuomo’s seeming reversal puzzled Cox, who called it a “flip-flop.” Cox said Cuomo should rightly be “proud” of his achievement in getting the bridge built and in naming it for his late father, Mario Cuomo. But he said the governor does not seem to have “settled in his own mind” how the remainder of the costs of the bridge will be paid for.

“When a project is almost finished, you ought to know how it’s going to be financed,” Cox said.

The governor gets another chance to answer the question when the ceremony to open the first portion of the bridge takes place mid-day Thursday.