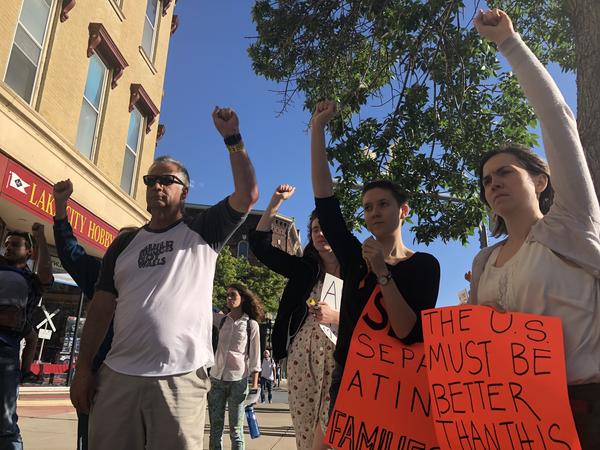 Protesters at Congressman Tom Reed’s office in Geneva called on the representative to take action against an immigration policy that is separating children from their families at the southern border.

Gabriella Quintanilla was 13 years old when she and her younger sisters left El Salvador to meet their mother in the U.S.

“We crossed the border on foot," she said, adding that it took nearly a month to complete the journey.

To cross the Rio Grande, they had to move in the middle of the night. Quintanilla was carrying her youngest sister, who was 4 at the time, but she was tired from traveling.

"The coyote, the person who was leading the way, told me he could help me with my sister," she explained. "Ten minutes after that, he screamed, 'The police are coming! Everybody run!' And so, when everybody ran away, I tried keeping up with him and I couldn’t."

She lost her sister, in a strange land, in the middle of the night.

Quintanilla doesn’t know how she found her sister an hour later in the pitch black on the other side of a barbed wire fence. She calls it a miracle. But she will never forget how it felt to be separated.

She recalled: “I felt like I had no heart for all of that time that I lost her.” 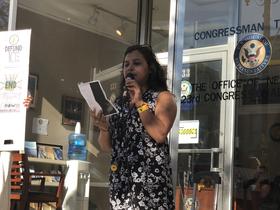 Now, Quintanilla is fighting a different kind of separation at the border. At a rally outside Republican Congressman Tom Reed’s office, Quintanilla shared her story with over 100 protesters.

They’re rallying against what’s being called the "Zero Tolerance" immigration policy, which is the process of immediately charging anyone crossing the border with a crime, if they do so without proper documentation.

If people are traveling with their children, those children can be deemed unaccompanied minors and transferred into government custody.

Attorney General Jeff Sessions announced the policy in May, saying, “If you’re smuggling a child, then we will prosecute you. And that child will be separated from you, probably, as is required by law.”

So far the U.S. government has not released official data about how many children have been separated from their families this way, but it’s estimated to be between 500 and 2,000. Some of them are under a year old. 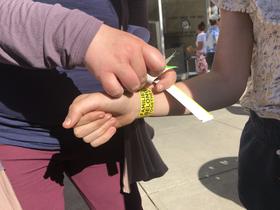 Since its implementation, the policy has generated outrage, and not just at the southern border. Edgar Brown helped organize the Families Belong Together rally in Geneva.

“It’s just scary to think that kids can be taken from their parents," he said. "If you’re a parent, not knowing where your kids are, this is something very near and dear to the hearts of all of us.”

At the event, protesters carried signs, chanted and wore yellow wristbands on their left wrist, intended to mimic those that identify parents who are arrested at the border with their children.

Reed’s office released a statement this statement about the event:

To represent people, you have to listen to people. My staff and I welcome and value the comments and concerns expressed by constituents and are happy to see civic-minded individuals engaged in the political issues our country faces. My offices are always open to New Yorkers to express their views, and I take serious representing Geneva, along with the rest of the 23rd district, in Washington.

Reed has previously said he is in favor of stricter security at the border to deter illegal immigration, but has not commented publicly on Zero Tolerance.