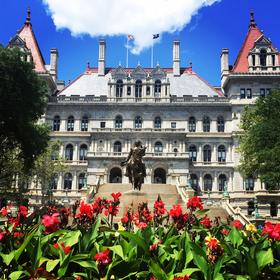 Cuomo, in a statement, said anyone who falsely makes bomb threats to a community center can now be charged with a class A misdemeanor offense, punishable by up to a year in jail.

For Assembly sponsor Amy Paulin of Westchester, the bomb threats last winter became personal. Her local JCC, which is one mile from her home and is where she swims and sends her children to classes, was among those targeted.

She said at the time that bomb threat was called in, there were toddlers, nursery school children and seniors in the building who had to be evacuated.

“These are busy intersections and they had to march all these children to safety,” Paulin said. “And that’s scary, too.”

There were also threats made against the JCC in Brighton.

Sen. Patrick Gallivan, the bill’s sponsor in the Senate, is a former Erie County sheriff. He said he was surprised to learn that there is no actual law against calling in a bomb threat to a community center.

“Come to find out, there was not a law in place that actually covered this,” Gallivan said.

Gallivan, who is from western New York, said the measure adds community centers of all types to an existing law that covers bomb threats to public gathering spaces, including schools, parks and hotels.

“The legislation actually changes the definition of public place,” said Gallivan, who added that if someone now calls in a false bomb threat, they can be “charged with an offense under the penal law.”

In the cases last winter, an Israeli teenager was eventually charged with making some of the threats as part of a profit-making business on an illegal Internet site.

But the sponsors of the bill said they think in the current political climate — which included three deaths in Charlottesville, Virginia, during a white supremacist rally over the weekend — people are right to be worried that something like the false bomb threats might happen again.

President Donald Trump on Monday called out the Charlottesville demonstrators, saying racism is “evil” and the KKK, neo-Nazis and white supremacists are “repugnant” to American values. Trump was under pressure for not naming the groups or specifically condemning them after violence erupted Saturday.

Gallivan, a Republican, said he’s happy that the president spoke out more strongly.

Gallivan said he thought Trump’s initial comments were “appropriate,” but he said he can “understand” why some people did not think the president went far enough and were upset.

Paulin, a Democrat, agreed that Trump said the right things Monday, but she said it should have happened sooner.

“It’s just a little shocking that it took all this public pressure to get him to do that,” Paulin said. “We need a strong leader to call it hatred when it is. Whatever side it’s on, whoever is doing it.”

Both Paulin and Gallivan said that everyone needs to dial back the rhetoric.