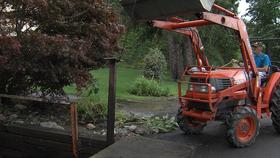 A major disaster declaration has been issued for seven counties that sustained serious damage during severe storms and flash flooding in August.

The FEMA Assistance can be used towards funding for emergency protective measures, debris removal and repairs to public infrastructure.

State and local estimates were at more than $36 million in response costs and infrastructure damages.

"The roads are back open, at least interim bridge repairs have been done to get around and debri clean up is well underway but there is still more to do."

Rowe was in Lodi Monday, a town hit hard by the storms.

"So I was asking some questions yesterday, I said, "Pardon my ignorance but when's the last time something like this happened." And the answer was never."

Governor Andrew Cuomo says extreme weather is the new normal and all that all levels of government need to reorient to best help those impacted.