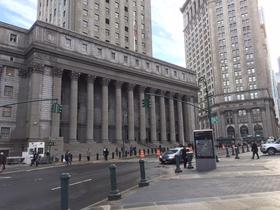 Governor Cuomo’s former closest aide received a prison sentence today of six years after being convicted of  illegally gaining over $300,000  in  bribery schemes.

Judge Valerie Caproni sided with the wishes of federal prosecutors, who sought five or more years in prison for Percoco , following his conviction on three counts of bribery for participating in two illegal schemes to enrich himself while offering illegal services to a power plant company and an Syracuse development firm.

The judge, says she hopes the sentence sends a warning message to Albany that these types of crimes will not be tolerated .

Percoco was convicted of receiving over $320,000 in illegal payments, including  a $90,000-per-year job for his wife, paid by a power company that was seeking help in starting up a plant in the Hudson Valley. Prosecutors documented in the trial that Lisa Percoco did very little work for the money.

Percoco also got $35,000 in cash in exchange for helping a Syracuse area development company obtain back payments and special favors for building a number of economic development projects, including a film hub in central New York that stood empty for years.

Percoco, in a letter to the judge before he was sentenced, and in brief remarks in court, said that he has “tremendous remorse” for what he did. Percoco also wrote that his poor choices were his alone, and did not involve anyone else, including his former boss and former close family friend, Governor Andrew Cuomo.

The governor’s father, the late former governor Mario Cuomo, once referred to Percoco as his third son, and Andrew Cuomo has said that Percoco was like a brother to him.

John Kaehny is with the government reform group Reinvent Albany, and he’s been closely watching the trial. He says the conviction and sentencing of Percoco is really too little, too late. And he says there’s no “joy” in the news of Percoco’ s punishment.

“We look at it more akin to a disease, and Albany being a town that has dirty water and no health department,” said Kaehny who likens the federal prosecutors to “haz mat” teams coming in after a disaster.

“It means that you’ve already had a failure,” he said.

Kaehny’s group and other organizations have advocated for years for ethics law changes, with no success. Kaehny says he hopes that six new reform-minded Democratic State Senate candidates who won in the September primaries might reenergize efforts for change when the legislature next meets in January.

“And, it’s an election year,” Kaehny said. “the hope is that pressure from voters will compel changes ”.

Susan Lerner, with Common Cause said in a statement that  “New Yorkers deserve better”, and she urged Cuomo to take the lead to close a loophole in the campaign finance laws that allow donors to use Limited Liability Companies  to skirt contribution limits, to ban outside income for lawmakers and to increase oversight over state economic development programs.

Percoco is the first of several former Cuomo associates to be sentenced for crimes including bid rigging. The former head of the governor’s upstate economic development programs, and former SUNY Polytechnic President Alain Kaloyeros will be sentenced later this year, along with the Syracuse developers, and Buffalo developer Louis Ciminelli.

Governor Cuomo, in a statement said  “ the rule of law is paramount.” And that “ Joe Percoco is paying the price for violating the public trust”.But the governor says he feels sorry for Percoco’s young children and his family.

Percoco will start serving his sentence on December 28th. His lawyers say he will appeal.

Molinaro, as well as Cuomo’s other political opponents, were quick to react.

“Andrew Cuomo was sentenced today — he just doesn’t have to do the time,” said Molinaro in a statement, who said the governor’s admisntration needs to be further investigated.

Independent candidate for Governor Stephanie Miner who was formerly the mayor of Syracuse and the co chair of the state Democratic Party under Cuomo said in a statement that “today is a sad day for New Yorkers”. And Miner says the upcoming sentencing of the other former Cuomo associates convicted of corruption means “more sad days ahead”.

“How many public officials have to be convicted before we act?” she asked.