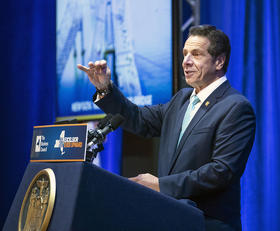 The state’s high property taxes and outmigration problem were among the issues discussed by Gov. Andrew Cuomo and his Republican opponent, Marc Molinaro, this week when each separately visited a meeting of some of the state’s business leaders.

Molinaro spoke first to the Business Council meeting on Lake George, where he unveiled a plan to reduce New York’s high property taxes by 30 percent. Molinaro said the state’s taxes, named by the conservative Tax Foundation as the 48th worst in America, are driving businesses and people out of the state.

“People are so desperate to get out of New York, they are dying sooner,” Molinaro said, citing a recent report that showed the average life expectancy of New Yorkers has grown shorter.

And he said school districts across the state are “shrinking dramatically.” 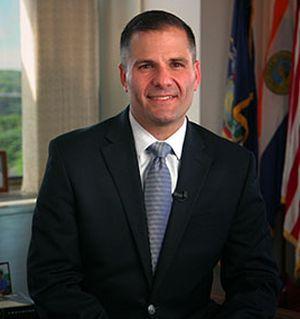 Speaking to reporters afterward, Molinaro said Cuomo and his predecessors have all said they’d cut taxes in a meaningful way but have failed to do so.

“We’ve been promising this for generations,” Molinaro said. “And it’s time that we finally deliver meaningful property tax relief for New Yorkers.”

Molinaro’s plan includes a state takeover of the $7.6 billion that counties pay for the Medicaid program, a cost borne by property taxpayers.

“I’m tired of Albany pretending as if serving poor people isn’t their responsibility,” he said.

Molinaro was short on details, though, such as how the state would pay for the Medicaid takeover. And while he said he’d control costs going forward, he did not name cuts that might have to happen. Molinaro, whose family received food stamps when he was a child, said he’ll roll out more details on the plan soon.

Cuomo, who appeared at the business summit a day later, called Molinaro’s plan a “sham.”

“Yeah, great, and then where does the state get $7.6 billion?” Cuomo asked. “You either have to raise taxes on the state side, or you have to cut education.”

During his first term in office, Cuomo enacted a property tax cap that limits the growth of local property taxes to 2 percent per year or the rate of inflation, whichever is lower.

Cuomo raised some eyebrows, though, when he said the state’s outmigration is simply due to bad weather, not economic conditions.

“People will make demographic choices about where they want to live,” Cuomo said. “Some of them are climate-based.”

“They want to fish, they like the warm weather, God bless them,” he said.

The independent candidate in the governor’s race, former Syracuse Mayor Stephanie Miner, said the remarks prove the governor is “out of touch,” and that he is ignoring the problems of high taxes and lack of opportunity.

Cuomo, one day later in Buffalo, did not back away from his remarks. He said people might have left the state in the past because of high taxes that burden retirees and lack of jobs for young people, but he said that’s not the case now, and there’s been an uptick in millennials moving to the state.

“Today is different than it was, fundamentally,” Cuomo said. “And the factors that existed that caused people to leave no longer exist, and actually people are coming back.”

There is one topic where Cuomo and his opponents, Molinaro and Miner, may all agree. All are reluctant to endorse raising taxes on the wealthy. An income tax surcharge on millionaires expires next year. Cuomo said he won’t decide before Election Day on whether it should be renewed.