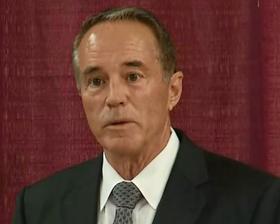 Western New York Congressman Chris Collins is suspending his campaign for re-election. After his recent indictment on insider trading charges, on Saturday morning, he released this statement:

"Democrats are laser focused on taking back the House, electing Nancy Pelosi Speaker and then launching impeachment proceedings against President Trump. They would like nothing more than to elect an 'Impeach Trump' Democrat in this District, which is something that neither our country or my party can afford.

After extensive discussions with my family and my friends over the last few days, I have decided that it is in the best interests of the constituents of NY-27, the Republican Party and President Trump’s agenda for me to suspend my campaign for re-election to Congress.

I will fill out the remaining few months of my term to assure that our community maintains its vote in Congress to support President Trump’s agenda to create jobs, eliminate regulations, reduce the size of government, address immigration and lower taxes.

I will also continue to fight the meritless charges brought against me and I look forward to having my good name cleared of any wrongdoing.”

Collins was indicted on charges that he used inside information about a biotechnology company to make illicit stock trades.

The charges were announced and the indictment unsealed in New York City on Wednesday.

On Wednesday night, Collins had said in a Buffalo news conference that he did plan to run for re-election

Collins, who is one of the wealthiest members of Congress, was the first member to publicly endorse Donald Trump during the 2016 presidential campaign. He also served on Trump's transition team.

Chris Collins has denied any wrongdoing. Chris Collins, his son Cameron, and Zarsky all pled not guilty on Wednesday afternoon. They were released on $500,000 bond (each) and their own personal recognizance.

Collins was first elected to the 27th Congressional District seat in 2012. He faces opposition this year from Democrat Nate McMurray and Reform Party candidate Larry Piegza.

The district includes all Orleans, Genesee, Wyoming, and Livingston counties, with parts of Erie, Monroe, Niagara, and Ontario counties.

It is not immediately clear what the process will be now for Republicans.  Monroe County GOP Chair Bill Reilich said that Republican leaders across the 27th Congressional District are evaluating several "highly qualified individuals."

But state election law has certain specific instance in which a candidate, such as Collins, could be removed from the ballot at this point in the year. Those include if the candidate dies, runs for another office, or moves out of state.

Nazareth College political science professor Tim Kneeland says because House Speaker Paul Ryan and other Republicans showed “less than tepid support” for Collins, it probably pushed him out of the race.

He says the process to get Collins off the ballot now, because it’s so complicated, could end up in court.

The Buffalo News reports there are a number of Republicans interested in running for the seat.

At this point it is still unclear how Republicans can put a new candidate on the ballot -- and who that candidate will be. Stefan Mychajliw, the Erie County comptroller, jumped into the race Saturday.

Bridgett Bowman is a political reporter for Roll Call in Washington, D.C. She told Buffalo public radio station WBFO that it would likely have been easier for McMurray to run against Collins, because of the indictment hanging over him. She says if a more "generic" Republican is able to run for the seat, that would probably make it tougher for the Democrat, McMurray, because it has been a staunchly Republican district.

This is a developing story. Check back for updates...