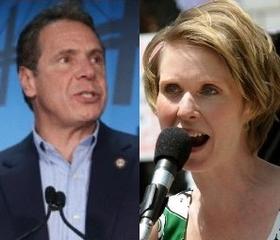 Thursday is primary day in New York, and the hottest race is between Democratic incumbent Gov. Andrew Cuomo and his challenger, actor and education advocate Cynthia Nixon.

Cuomo, who leads Nixon in the polls, has spent the days leading up to the primary at several get-out-the-vote rallies, where he railed against President Donald Trump and what he called his “extreme conservative philosophy.” He told supporters that a vote for Cuomo is a vote against Trump.

“Stand with me against this president,” Cuomo told the crowd. “Let’s show him that his nonsense doesn’t sell here!”

In three events in Buffalo, Rochester and Syracuse, Cuomo did not mention Nixon once.

Despite the governor’s attempt to ignore his challenger in public, Cuomo’s campaign has spent more than $8.5 million in recent weeks on TV ads and paid posts on social media. The state Democratic Party, which Cuomo controls, sent out a controversial mailer to Jewish voters falsely linking Nixon with anti-Semitism. Nixon regularly attends a synagogue and has Jewish children.

Nixon, who has run a grassroots and social media campaign with the help of the progressive Working Families Party, released a television ad in the final days of the campaign. It highlights her support for single-payer health care and for ending the mass incarceration of African-Americans. The ad also compares her background to that of her opponent, saying New York is “a place where the daughter of a single mom can defeat the son of a governor.”

Nixon said Cuomo is ignoring pressing problems in New York, including the decline of the New York City subways, upstate’s economic malaise and corruption within his administration. Several former associates of Cuomo, including his former closest aide, have been convicted of bribery and bid-rigging.

And Nixon believes the polls are wrong. She said they did not predict previous insurgent victories by Democratic challengers from the left.

“The polls right now are not capturing the new progressive voters and the hunger for real change,” Nixon said.