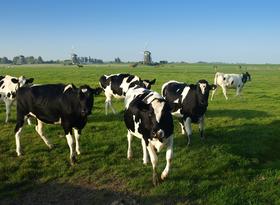 New York dairy farmers should see some advantage from a revamped trade deal with Canada.

That’s the hope, anyway, with news that Canada will be  linked again with the U.S. and Mexico in a revamped North American free trade deal after weeks of negotiations.  The new deal, replaces NAFTA, which President Trump had called a job killing disaster.

The new pact should help open up dairy markets for U.S. farmers. That according to Lauren Williams, Senior Associate Director for National Affairs for the New York Farm Bureau.

“I think we’ll want to see the final details but I think overall it should open up more dairy markets, which I think is good for our dairy farmers who have some excess milk here in the U.S.

Williams says one positive for dairy farmers with the new agreement is that it will open the Canadian market to more exported American dairy products.

She says the previous agreement, “basically, kind of blocked off the U.S. and other countries from exporting products like ultra-filtered milk or protein powders (made from milk) into Canada, and kind of protected the Canadian ultra-filtered milk market. So by eliminating that, we’re hopeful that those products  will again be allowed to be exported into Canada,” Williams told WXXI News.

But Williams also notes that the prices that dairy farmers get on their products is due to a range of factors, including the fact that there has been a decline in fluid milk consumption by U-S consumers.