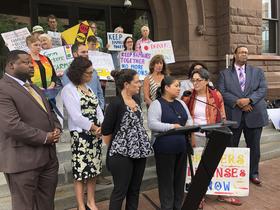 Across the state, migrant farm workers and advocates are drawing attention to an important issue they say could help them: driving privileges regardless of immigration status.

Isabela did not want to use her last name, because she is an undocumented immigrant from Mexico. She is 49 years old, and has been living in the U.S. since 1991 with her husband. They have three children, all born in the United States. She spoke with WXXI through an interpreter.

If illegal immigrants are given driver’s licenses, how is that fair to people who have taken the time to go through the naturalization process? ... If you want the privileges of being a citizen of the United States and the State of New York, then become a citizen.