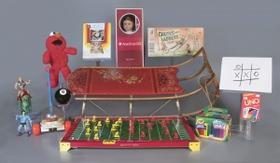 The National Toy Hall of Fame here in Rochester has announced the 12 finalists for this year’s induction.

Chris Bensch, vice president for collections and lead curator at the Hall of Fame, says a range of toys are contenders this year, including Chutes & Ladders, American Girl Dolls, tic-tac-toe, chalk and the Magic 8 Ball.

"This year, the Susan Lucci of the toy world is the Magic 8 ball. This is its seventh time on the finalists list; it has not made it into the Hall of Fame yet."

He says this year is especially exciting because six of the 12 finalists are brand-new to the final round.

Listen
Listening...
/
The National Toy Hall of Fame here in Rochester has announced the 12 finalists for this year’s induction at The Strong museum. WXXI's Caitlin Whyte has more.

"So they are having their first time in the limelight, their chance to have an opportunity to get into the elite place that is the National Toy Hall of Fame."

Also new this year is a players' choice option. For the next week, you can cast your vote on what should be inducted, and the three toys that receive the most public votes will be submitted and will join the other top-three submissions by members of the National Selection Advisory Committee.

The final 2018 toy inductees, chosen based on the ballots, will be announced at The Strong museum on Thursday, Nov. 8.

Rounding out the top 12 are Uno, Tudor Electric Football, Tickle Me Elmo, Fisher-Price Corn Popper, Masters of the Universe, pinball, and the sled.