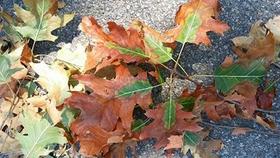 The New York State Department of Environmental Conservation says that ‘oak wilt,’ a disease that affects oak trees, has been detected in South Bristol.

This is the second location in Ontario County where oak wilt has been confirmed. It was found in the Town of Canandaigua in 2016.  DEC officials say that Ontario County is one of four counties in the state that have confirmed oak wilt infections.

A concerned landowner contacted the state after several oak trees no their property began showing signs of oak wilt, including dropping discolored leaves and then dying rapidly. Samples of one of the trees were sent to Cornell where they tested positive for the fungus.

Mark Gooding is a Regional Forrester for the DEC. He says that, “once an oak tree gets this, it is fatal to that tree so they all will die eventually; Red Oak (will) die within a year or two, and the White Oak group could take maybe 5 to maybe 10 years before it dies."

The current treatment method is to remove the infected trees as well as any nearby oaks that could become infected.

The DEC will issue an order establishing a quarantine district prohibiting the movement of oak material out of the immediate area to prevent the fungus from spreading. Also, the agency will conduct aerial and ground surveys over the next few weeks to identify additional trees that may be infected.

The DEC asks the public to report any occurrences where an oak tree died over a short period of time, especially if it occurred between July and August, to the Forest Health Information Line toll-free at 1-866-640-0652.