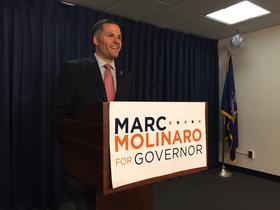 The general election for governor in New York is heating up, with the Republican candidate, Marc Molinaro, calling for the resignation of a former advisor to incumbent Andrew Cuomo, while the sitting governor rallied against President Trump.

Molinaro is making  a statewide string of appearances to focus on what he says is rampant corruption in the Cuomo Administration.

“This governor is allowing almost a corrupted criminal enterprise to function within state government,” Molinaro said. “And it needs to come to an end.”

The GOP candidate for governor is highlighting two controversies that arose in the recently concluded democratic primary. Cuomo was  criticized for prematurely opening a new bridge that bears the name of his later father, Mario Cuomo, when there were still some safety questions.

In addition, the democratic state party, controlled by Cuomo, sent a mailer to Jewish voters that falsely accused challenger Cynthia Nixon of anti-Semitism. The Cuomo campaign said former top advisor to the governor Larry Schwartz okayed the mailer, but Schwartz neglected to turn the pamphlet over to read the negative side.

Molinaro is skeptical of that explanation.

“First they never saw it, and then it was some volunteer, and then it was that they only reviewed one side of a piece of mail,” Molinaro said. “And if you believe that, I have a bridge that I can name after you.”

Molinaro is calling for Schwartz to resign from the MTA Board. He accuses  Schwartz of working as an unregistered lobbyist, just like former Cuomo associate Todd Howe, who testified in the bribery trial of Cuomo’s former closest aide Joe Percoco. Howe is now in prison, and Percoco faces sentencing next month. Schwartz is Chief Strategy Officer at OTG, a company working on the La Guardia airport renovations. It is aloes involved in building gambling casinos, which need approval from the state.

A spokeswoman for the Cuomo campaign, Abbey Collins, says Schwartz is not a lobbyist, and that Molinaro’s charges are baseless. And Collins took shots at Molinaro’s campaign manager, David Catalfamo  and a former Republican US Senator.

“Larry is a professional and a part-time volunteer, unlike his political hit men Al D'Amato and lobbyist David Catalfamo,” said Collins. “ Instead of cheap shots, Molinaro should stop hiding and release his taxes.”

Cuomo, meanwhile held a rally in New York City with democratic elected officials. The governor touted his big win in the September 13th primary, where he won two thirds of the vote over challenger from the left Cynthia Nixon.

Cuomo said the party must now “come together like a family”. 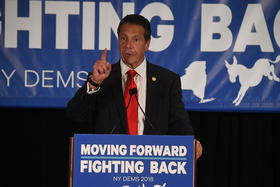 The governor did not mention any plans he might have for a third term, but set his sights, once again, on President Trump. Nor did he mention Molinaro or any of his other opponents, including independent and former democratic mayor of Syracuse, Stephanie Miner.

Cuomo says Trump has “declared war” on New York, and he will “lead the resistance” for the nation.

“He has declared war on you,” said Cuomo, who said   taxes will go up for New Yorkers, women will lose the right to choose abortion, and members of the LGBTQ community will see their rights “compromised”.

Molinaro says he “gets” the anxiety over national politics, but he says Cuomo is trying to draw attention away from his administration’s record.

“Andrew Cuomo is like some sort of deranged Wizard of Oz,” Molinaro said. “’Pay no attention to the corruption in my administration. Look over there, it’s Donald Trump’”.

Cuomo, when he mentions Molinaro at all, calls him a “trump mini-me”. Molinaro did not vote for the President and does not back many of his policies.