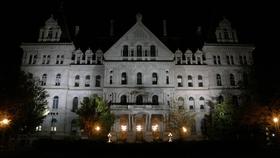 A large campaign war chest, substantial spending on television ads and union support paid off for Cuomo as he beat back a challenge from the left from Nixon.

Cuomo did not appear in public, but in recent days, he focused his message not on his accomplishments or on his opponent, but on his fight against President Donald Trump and Trump’s policies, and it seems the strategy paid off.

Cuomo held multiple get-out-the-vote rallies in the days leading up to the primary.

“I want to send a message to this president,” Cuomo told supporters on Sept. 10. “It’s every New Yorker who believes you are repulsive to what we believe.”

Nixon told supporters that she was “proud” of what her campaign accomplished.

But she expressed some bitterness over dirty campaign tactics, including a mailer to Jewish voters approved by a top aide to Cuomo that falsely accused Nixon of anti-Semitism. Nixon attends a synagogue and has Jewish children.

“My family was slandered,” Nixon said.

Nixon says she’s pleased that she pulled Cuomo to the left on several issues, including legalizing marijuana, and that she caused him to spend nearly half a million dollars a day on the race.

“I was going into it as an underdog, a lot of people said that the numbers would be against me,” Hochul said. “We’ve been fighting tooth and nail for every single vote.”

While Cuomo and the other statewide candidates who ran with him kept their seats, some former members of a controversial breakaway group of Democrats in the Senate lost to their primary challengers. Members of the Independent Democratic Conference were blamed by many Democrats on the left for helping keep Republicans in power in the state Senate for the past several years. Among those who lost: former IDC leader Jeff Klein.