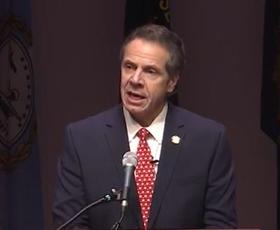 Saturday has turned out to be a big day for political news in Western New York.

Besides the word that Rep. Chris Collins will serve out his term but will suspend his campaign for re-election, we also were informed by the Monroe County Board of Elections that Governor Cuomo will issue a proclamation on Monday calling for a Special Election to fill the current vacancy in the 25th Congressional District.

That’s the seat held by longtime area Democratic Congresswoman Louise Slaughter, who died earlier this year. The seat has been vacant since she died in March.

Cuomo is calling for the special election to be held on November 6th, the same day as the general election, which officials say would avoid additional cost to the taxpayers.

So, voters in that district, which is contained within Monroe County, would actually be voting twice, once for filling the vacancy through the end of this year, and then for someone to be elected to the new two-year term which starts in January.

According to Monroe County Republican Chair Bill Reilich, Republican Jim Maxwell, who is running for the full term, will also run in the special election for a chance to fill out the remainder of this year’s term as well.

And Monroe County Democratic Chair Jamie Romeo says that  Joe Morelle, who currently is the Assembly Majority Leader, and is already the Democratic candidate for the full-year term, would also be their candidate for the Special Election.  Romeo says that if he wins the Special Election, Morelle would have to resign from his Assembly seat, for whatever weeks remain in 2018.