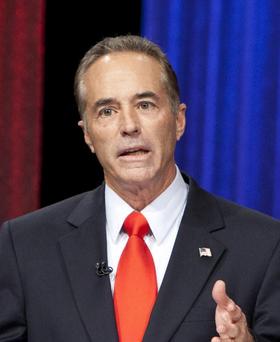 NEW YORK (AP, NPR & WXXI News) - Republican U.S. Rep. Christopher Collins of New York has been indicted on charges that he used inside information about a biotechnology company to make illicit stock trades.

The charges were announced and the indictment unsealed in New York City on Wednesday.

The indictment charges Collins and two others, including the congressman's son, with conspiracy, wire fraud, and other counts.

"Congressman Collins cheated our markets and our justice system," said Geoff Berman, the interim U.S. Attorney for the Southern District of New York. "He placed his family and friends above the public good."

Prosecutors say the charges relate to a scheme to gain insider information about a biotechnology company, Innate Immunotherapeutics Limited, headquartered in Sydney, Australia, with offices in Auckland, New Zealand. The company developed a drug intended to treat secondary progressive multiple sclerosis.  Chris Collins was the company's largest shareholder, holding 16.8 percent of its stock, according to the indictment. His son Cameron held 2.3 percent of the company's stock.

According to the indictment, Chris Collins tried to get early word on drug trial results by Innate Immunotherapeutics Limited. When drug trial results were negative, Chris Collins allegedly passed the information on to Cameron Collins so he could make trades to avoid losses before the negative results were made public, knowing, as a director of the company, he could not make the trades himself. 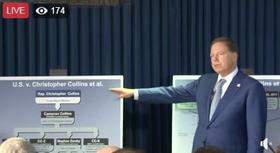 Collins, who is one of the wealthiest members of Congress, was the first member to publicly endorse Donald Trump during the 2016 presidential campaign. He also served on Trump's transition team.

Chris Collins has denied any wrongdoing. Chris Collins, his son Cameron, and Zarsky all pled not guilty on Wednesday afternoon. They were released on $500,000 bond (each) and their own personal recognizance.

Cameron Collins and Zarsky have already surrendered their travel documents to the FBI. Chris Collins is turning in his diplomatic passport to the FBI but not all of his travel documents.
The next court appearance is on October 11.

Ryan calls insider trading "a clear violation of the public trust.'' He says he's moving against Collins even though a court will decide whether the lawmaker is guilty of the allegations.

"This is why I got in this race, because I understand that the man who claims to represent this community doesn’t actually represent it," McMurray said. "Today’s allegations by the U.S. attorney were shocking and sad, but not surprising – this has been unfolding, piece by piece, for many months."

Reform Party candidate Larry Piegza is also in the 27th Congressional District race. The district includes all of Orleans, Genesee, Wyoming, and Livingston counties, with parts of Erie, Monroe, Niagara, and Ontario counties.

The non-partisan Cook Political Report rates the district as likely to remain in GOP hands.

"We will answer the charges filed against Congressman Collins in court and will mount a vigorous defense to clear his good name.  It is notable that even the government does not allege that Congressman Collins traded a single share of Innate Therapeutics stock.   We are confident he will be completely vindicated and exonerated.

Congressman Collins will have more to say on this issue later today."

Here is a copy of the indictment: