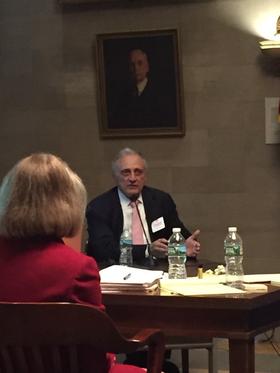 Former 2010 gubernatorial candidate and Buffalo businessman Carl Paladino has been removed from the Buffalo Board of Education in a ruling by the state education commissioner issued Thursday.

Education Commissioner Mary Ellen Elia upheld the Buffalo School Board’s application to remove Carl Paladino as a member of the board. Paladino drew attention for making racially charged comments about President Obama and his wife Michelle in a Buffalo newspaper last December. But the actual charges against him were for leaking sensitive information to the press from a closed door session of the board.

In the decision, Elia writes that Paladino “disclosed confidential information” from the board’s executive sessions regarding collective bargaining negotiations with the school district’s teachers union. She says his actions were a “willful violation of the law”.

The attorney for the school board, Frank Miller, said “Justice has been done”.

“The message has been sent,” Miller said. “No one, regardless of their station in life, is above the law.”

Commissioner Elia rejected Paladino’s contention that he was trying to get information about fraud and corruption within the board out to the media, saying that “is not a defense”.

The President of the Buffalo School Board, Barbara Seals Nevergold, said Paladino, who often clashed with other board members, was a disruptive force on the board. She said she hopes that things will now settle down.

“We’re looking forward to being able to move forward without the distractions that have accompanied his behavior,” Seals Nevergold said. “So that we can get back to the work of this district.”

The education commissioner issued the decision in a week where racial divisions have been highlighted in the U.S.. A white supremacist rally in Charlottesville Virginia  on August 12th left three people dead.

During the hearing, Paladino brought up the racist comments he made against the Obamas. He apologized, saying “there was no excuse” for the remarks, and that he had brought “shame” on his family.

But Paladino’s lawyers claimed that the school board was retaliating against Paladino for his remarks by filing the charges that he leaked board private information. They argued that Paladino’s First Amendment right to free speech was violated.

Commissioner  Elia found that Paladino did not prove that he was subjected to retribution from  the board, and writes there is “no evidence” that his right to free speech has been “chilled or otherwise impaired”.

Paladino attorney Dennis Vacco disagrees. He says he’s “terribly disappointed” with the decision, and is filing an appeal in State Supreme court.

“I’ve had a chance to review this decision with Mr. Paladino, and he has instructed me to move forward,” Vacco said.

Vacco says he thinks it’s “excessive” to remove a “twice elected public official”, and he says Paladino did not leak the information about the teacher contract talks until three months after the private board meeting occurred and after the contract had already been ratified.

He is getting punished for pulling the curtain back,” said Vacco, who said Paladino was simply trying to reveal that the teachers union had “manipulated” the school board to “arrive at a budget busting contract”.

Vacco, who is the former State Attorney General, says he thinks Commissioner Elia’s decision was politically motivated. He says it’s “curious” that the decision came one day after a protest disrupted a Buffalo school board meeting on Wednesday night, where he says demonstrators attempted to “link” the events in Virginia to Paladino.

“I’ve been around long enough to understand that there’s always a tinge of politics in any administrative decision,” Vacco said.

Paladino has also filed a federal lawsuit, saying that his First Amendment rights were violated in the removal proceedings. Vacco says he believes the ouster of his client from the school board will actually bolster Paladino’s case in federal court.

Under the education department ruling, Paladino is banned from seeking re election to the school board for a year. The next school board election will occur in 2019.