Albert Paley getting ready to downsize some studio operations

TweetShareGoogle+Email
Listen
Listening...
/
Albert Paley, the internationally known sculptor, who is based in Rochester, says he is scaling down some of his local operation in the next couple of years. WXXI’s Randy Gorbman has the details... 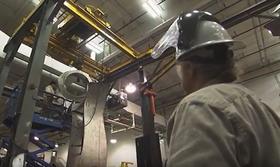 Paley says that in about 18 months the lease on his largest studio, located on Lyell Avenue, will be up, and he thinks that’s a good time to move out of the 40,000 square foot space used for metal fabrication and other aspects of his business. Paley also notes that by that time he will be 76, so it’s a good time to reassess how he wants to move forward with his art.

“It’s a huge business enterprise, so, to restructure and to downsize I can focus more on the intimacy of the work, because we focus nationally and internationally and there’s a lot of travel involved and it’s just time to reassess and downsize.”

Paley says right now, a lot of the work involving the large scale, metal sculptures is done at the Lyell Avenue studio.

“But also we subcontract a large part of what we do, the burning, the cutting, the shipping, the delivery, some of the forming and even some of the fabrication so it’s just a matter of getting the physicality of a lot of those operations out of my hands so I can focus more on the aesthetics.”

He says this move will also give him more time to focus on one-of-a-kind pieces and unique projects.

And Paley also wants to spend time working on legacy planning. He says he’s developed a significant archive over his long career.

“Basically I want to place that in an educational institution for museum studies or it could be used as a resource because my work has crossed a lot of different professional boundaries and I think that it would have value in that artistic context.”

Paley says even when he moves out of his largest studio, he will still have two other studios in town he uses for design and other work.

Here is a video Albert Paley released on his website about his decision to scale back some studio operations: