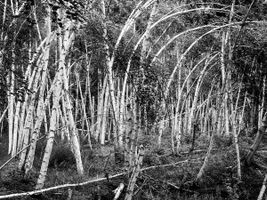 Reception: March 6 | 5-7 pm The Solarium Gallery at Houghton House Gallery Hours: M-F 9:30-4:30, Sat 1:30-4:30 Galleries closed March 14-22 for Spring Break Areca Roe presents Drunken Forest, a new body of photographs and video. Roe photographed around Fairbanks, Alaska, where discontinuous permafrost has long been part of the landscape, but the rising temperatures are shifting and changing the land. The consequences of this thaw are both immediate and long term. Currently some houses that rely on permafrost as a stabilizing factor are slumping, potholes and sinkholes are appearing in the landscape, and the shifting ground is altering areas of forests to become tilted or "drunken." Carbon dioxide and methane (another potent greenhouse gas) are being released from this thawing landscape, with the potential to create a devastating feedback loop. Roe spoke with several scientists researching the permafrost, locating sites to photograph and capturing the visual manifestations of the changing landscape. The resulting series is titled Drunken Forest, the evocative term used even in scientific literature for the areas of forest destabilized by permafrost thaw. These visual changes serve as powerful metaphors/warnings for the far-reaching and destabilizing consequences of permafrost thaw, and climate change in general.